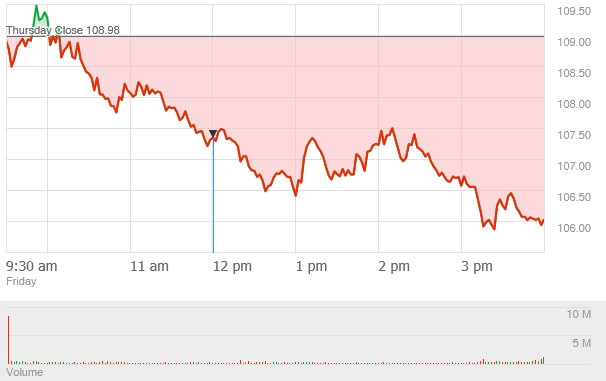 Analysts on Wall Street have declared: 2015 is the year the iPhone peaked!

Top analysts from Morgan Stanley (led by ultra-bull Katy Huberty), Stifel, Credit Suisse, JP Morgan, Baird, Pacific Crest and other investment firms have released reports over the last few days stating their belief that because of a weak demand for the iPhone 6S/6S Plus, Apple’s iPhone sales will drop for the very first time in the FY2016 and CY2016, for the very first time since the iPhone’s release in 2007.

Huberty, the first analyst to sound the alarm, thinks that iPhone sales will drop by nearly 6% in FY2016 (equivalent to 2.9% in CY2016). More specifically, Huberty is convinced that Apple will only sell 218 million iPhones in FY2016 (a 5.7% drop), which is a rather steep decline from the 247 million she predicted previously.

Although each firm gave different reasons*, they all revised their predictions downwards after a single event: Dialog Semiconductor, a company that earns more than 90% of its mobile revenue from Apple, recently brought down its Q4 revenue guidance from the range of $430m—$460m to the range of $390m—$400m because of an unexpectedly weaker demand in its mobile business.

*Credit Suisse’s reasoning is the most interesting of all, and it basically boils down to: since everyone’s got a smartphone already, it’ll be harder for Apple to sell more iPhones.

If Wall Street’s smartest analysts are resting their predictions on the business of Dialog Semiconductor, then perhaps it is a good idea to ask if supply chain estimates are accurate.

The answer is (unsurprisingly?) a definite no.

Deriving product or revenue guidance from sources within the supply chain, or even an official statement from a supply chain operator, have led to disastrously wrong predictions in the past. There are a few examples of this from recent history:

Exhibit A: In June 2013, analysts downgraded Apple’s stock after “channel checks” showed a slowing demand for the iPhone 5s. A few weeks later, the company crushed expectations with its sales report.

Exhibit B: In October 2013, the Wall Street Journal reported that Apple had cut supply by about 20% at Pegatron and one-third at Foxconn. A few hours later, the Journal more or less retracted its story, and Apple did just fine that quarter.

Numerous people familiar with the thinking of Apple’s executives have also indicated that the “2015 peak iPhone” belief is one  which is not widely-held in the company. As growth slows, Apple is increasingly reliant on sales from the Greater China region and from Android converts, and have redirected some of its efforts to focus on maximizing its reach in these two areas. These early efforts (such as giving Android users an app to import all their data to a new iPhone) have been promising, and though it has yet to materially bear fruit, sales of the iPhone are not falling fast enough to concern the upper-management. Profits from iPhone sales account for two-thirds of all of Apple’s profits, but there is no need to sound the alarm and start taking drastic profits yet.

“It’s laughable,” one senior Apple employee told us, “[the analysts] have got it all wrong. Talk about a herd mentality.”